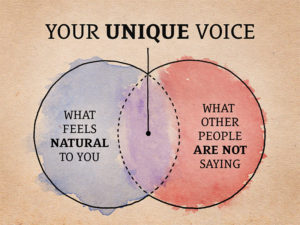 Over on Twitter, where I spend some social media time, there has been an uproar over the suspension of the actress, Rose McGowan’s account after she spoke up about being sexually assaulted by Harvey Weinstein. The gist of the uproar is that so many accounts have not been suspended for what many feel are more egregious “policy violations.” {1}

This started a call for #womenboycottwitter on October the 13th (or some had said Sunday, October 15). In any case, the call for women to log off twitter then—as you might suspect—started a related dust up about silencing and what was the best way for women to protest.

What these “discussions” did was to underscore a couple of important points. First, it’s hard, really hard, to figure out when to use your voice. Particularly, women have to work extra hard in figuring out when to speak, and even more so, how to phrase it. There are the endless studies and articles about gendered language and biases where men are perceived as being strong and women just bitchy.

Second, this issue of voice and when to speak or how to speak is a common topic and concern in higher education. Women at all stages of their careers wonder about the “hows” of voicing their views and concerns on anything from curriculum changes to the need for resources to a differing perspective in a faculty meeting, as well as how to combine their academic life with their own personal activism.

But no matter how hard it is, we still have to figure out when and where and how to speak up. There are no set rules or even really good advice for this. The most common advice is for pre-tenure faculty and that advice is to stay quiet, which is a bit too general and troubling for me to totally get behind it.

Though, I would offer three general suggestions:

One of the most important lessons I learned as a consultant is to deliver not great news (or in academic language, deliver a critique), while still being a professional. , All of those things we teach our students in our classes, such as establishing goodwill and being clear and direct, come in handy when trying to your voice.

While some of the conversations may not be easy, one must always treat people with courtesy and respect (even during those moments they may not deserve it). Being kind, staying on point with the discussion with evidence and support, and encouraging shifts in thinking through questions are all ways to voice your position.

You’ll always feel better about voicing your opinion when your professionalism can never be questioned (though it will be, but that is for another post. Sigh.)

Go as you mean to go

As I’m working on my own personal and professional reboot, the issue of voice has been an interesting one. Why? Well, I am at a new institution with it’s own culture and trying to figure out how best to interact in a new department with new people, but within the realms of old histories and cultures. It’s a tricky balance, but I was reminded recently that no matter all of that, you still have to go as you mean to go.

What that means is you need to be you. If something is important to you, speak up. Be professional (see above) and speak up. Now please know I do get and understand the need to learn a culture. I am not advocating you go a bit over the top and critique and question every little thing the moment you’re hired, but it’s not a good idea to be one person before tenure and another person after tenure. There’s much truth to pick your battles, but it’s an important truth. You have to figure out what is most important to you (in teaching, service, research) and then find your voice around those things.

Go as you mean to go.

Try out different approaches that fit you

It’s no secret that I walk to a different drumbeat and the fact I often tell a story about “calling bullshit” in a meeting with the university president (about his own idea) is a case in point about my own approach. But, it’s an approach that wouldn’t in a million years fit the vast majority of people. So as you’re finding your voice and determining when and what to say, it needs to fit who you are.

I encourage you to try different approaches to see which one fits you best. With a little practice, you’ll find one that works the majority of the time or that you can adjust based on the specific situation. Work on different phrases that you can start with that give you time to breath and get your thoughts in order before you speak; take good notes to help keep you on track; prepare to build your confidence; practice and role play when the stakes are high….There are lots of ways to try our different approaches. 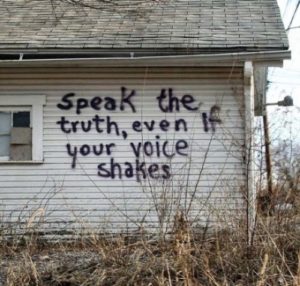 There’s much debate and intellectual musings on whether silence means you’re complicit. One thing that we’ve learned in rhetoric is that sometimes silence is the move you want to make and we also know (ala Ratcliff) that silence enables listening. You can find your voice in any number of ways.

Working on ways to find our voices can help with feelings of being overwhelmed and of focusing on the things we can control. But finding your voice—and when to use it–is extraordinarily personal. So I wish you strength and focus to find it, and know that there are lots of us out here to help you along the way.

Because we have to speak out against the things we feel are wrong at work and in society.

So find your voice. We’re ready to listen.

Wishing you joy, peace, and health.

{1} This is a long standing and complicated sort of issue where Twitter has failed on many counts. No space or room really to recount it here. It all boils down to the seemingly willy nilly way that Twitter enforces and also interprets its own rules.